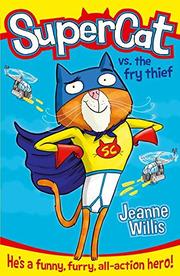 SUPERCAT VS. THE FRY THIEF

Have no fear, Supercat is here!

James Jones wanted an exciting pet, like a polar bear or a panther. What he got was a fat, orange tabby cat from the rescue shelter. No matter what James does, he can’t get Tiger to play along with his make-believe games. Then one day, while James is at school, Tiger devours a French fry and a moldy sock from under James’ bed—and suddenly, Tiger has superpowers. He can talk; he can even speak French. He can leap and fight and create his own costume. When James gets home and gets over the shock, the two set out to fight crime like Tigerman, James’ favorite comic-book hero. When the two stop to refuel with a snack of French fries, they discover a worldwide tater shortage has made the cost skyrocket. Could Count Backwards, Tigerman’s nemesis, be behind the shortage? More importantly can the duo keep Tiger’s abilities a secret from James’ nosy, pushy little sister, Mimi? Prolific British children’s author Willis kicks off a new series with a slow-out-of-the-gate origin story. Field’s abundant cartoon drawings add to the length and the appeal, but jokey superhero cats have been done better in Dan Santat’s Sidekicks (2011) and Ashley Spires’ Binky the Space Cat books.