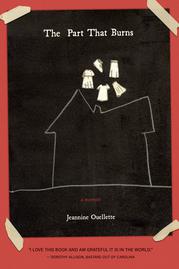 THE PART THAT BURNS

Ouellette entwines moments of personal pain with a lifelong awe of nature in this memoir.

The book opens with a fragment about the author’s mother, now in her late 60s, moving back home to Duluth, Minnesota, in search of “peace and quiet.” However, Ouellette’s formative years were anything but peaceful. In 1970, two years after she was born, her parents divorced, marking the beginning of an itinerant childhood. The family regularly moved, at one point relocating from Minnesota to Wyoming because of her mother’s new husband’s job. He had violent tendencies and played a “tickling game” with 4-year-old Ouellette, she says, which ended with his rubbing his hands between her legs. The author also describes childhood moments when she was “kicked out” of the family and made to live in the basement, with her mother pretending she was invisible. Other nonlinear fragments describe the author's forging a life for herself—navigating marriage, becoming a mother, and attending a sexual abuse support group. A key characteristic of Ouellette’s writing is her preoccupation with nature, as she calmly skips between accounts of her past and factual information about the natural world: “A tumbleweed is a plant known as a diaspore.” On occasion, these observations serve as distractions from personal pain; in other instances, they mirror the author’s emotional state: “you might also want to be a tumbleweed. Just look at them, lacy and weightless, rising and falling on rivers of air.” She juxtaposes these poetic moments with vivid, distressing passages, such as an account of Ouellette’s mother's hurling a frying pan at the author and yelling, “I should have aborted you when I had the chance.” The memoir also eloquently describes how the effects of abuse resonate into adulthood: “Scars don’t lose their feeling. They become more tender to the touch.” The presentation of the author’s life story as a series of fragments may strike some readers as idiosyncratic; however, this structure poignantly reflects a self-described “brokenness”: “you can tear a thing apart and tape it back together, and it will still be torn and whole.”

A textured remembrance of a traumatic childhood that also offers affecting moments of beauty.