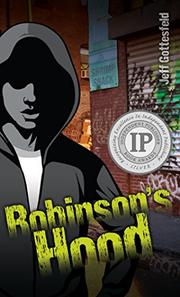 The first in a planned series is slight in length as well as in concept.

Robin—short for Robinson—lives with his grandmother “on the toughest street in the toughest hood in the tough city of Ironwood.” Devoted to school and to his grandmother, he spends his days outside school at the Barbara Jordan Community Center and helping out at his gramma's Shrimp Shack. Although readers may relate to the bullying and gang violence Robin encounters, they will most likely not swallow his teacher’s-pet narrative voice (“He'd already done his summer reading, an amazing novel called Bud, Not Buddy...and written a great five-paragraph essay too”). His lack of street smarts is similarly unbelievable: Even readers who aren't skeptical when Robin cheerfully asks the local bully, “You all ready for school?” will surely struggle when, out of just slightly more than idle curiosity, Robin goes to a spot where he sees a gang member hiding something and finds almost exactly enough money to save the Center from closing. An abrupt cliffhanger leaves the story completely unresolved, but with so many flaws, it's hard to imagine there will be much clamoring for the follow-up volume.