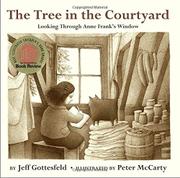 THE TREE IN THE COURTYARD

A personified horse chestnut tree witnesses history as it grows, “reach[ing] skyward in peace. Until war came.” So begins the story of military “strangers” who enter a city. Soon after, eight solemn-faced people—five adults, two girls, and one boy—come to live in the nearby factory annex, and the tree watches as one of the young girls sits by the attic window and writes in her diary, never leaving the building. The tree blooms “extra bright” the spring after the young girl and boy kiss. Then the people are taken away, and the “tree ke[eps] a vigil.” Years later, the tree dies, only to have her seeds replanted in many cities. The book’s nameless war is, of course, World War II, and the unnamed soldiers were German troops. By avoiding specifics, Gottesfeld seems to be trying to universalize the story of Anne Frank, and in doing so, he diminishes the terrible truth of the Holocaust and Hitler’s Final Solution, during which, according to the U.S. Holocaust Memorial Museum, 1 million or more Jewish children perished. Giving the tree human sentiments is a further misstep. McCarty’s brown ink drawings on a white background are suitably sober and evocative, with scenes that are photographic images capturing stark moments.

Anne Frank has been memorialized properly—elsewhere.