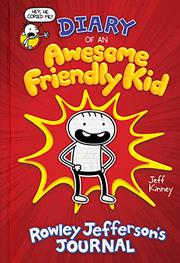 DIARY OF AN AWESOME FRIENDLY KID

From the Diary of a Wimpy Kid series

The wimpy kid’s best friend tells his side of the story.

After 13 volumes documenting events from Greg Heffley’s perspective, Rowley Jefferson takes a turn. The result is oddly refreshing: Greg’s unreliable narration gives readers plenty to chuckle at, but Rowley’s brutal honesty supplies fans of the series an unblinking look at their favorite protagonist. Greg’s jerk-y behavior that always lurked beneath the surface emerges fully here, coming dangerously close to ruining the character. Kinney uses this perspective shift to explore Greg’s behavior from the outside but through the eyes of his best friend, and that distinction is important. Rowley has cleareyed faith in his friend despite his father’s disapproval and nudges to make a better one. This faith is tested during a difficult sleepover and an exasperating study session but rewarded in the end. The Wimpy Kid books have never been heavy on plot, instead emphasizing character and gags. The gags in this volume are serviceable, but the character work is terrific. The fact that Kinney can expose new facets of his characters this deep into the series is a credit to the property. Underneath the marketing, the movies, the bookmarks, and the merchandise, the Wimpy Kid books are about a couple of pals figuring themselves out.

A pleasant twist on a sturdy franchise.