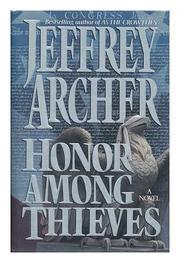 It's Amateur Night on the international intrigue stage, as perennial bestseller Archer (As the Crow Flies, etc.) shows Saddam Hussein's henchmen grooming an actor to take the place of the President so that they can—push the button that starts WW III? Plant a bomb that will destroy both chambers of Congress? No, steal the Declaration of Independence! Actually, the actor, one Lloyd Adams, is much less important than his support staff: Tony Cavalli, the unscrupulous, well-connected lawyer whose off-the-books ``Skills'' department takes on the assignment of switching the Declaration for a copy that will remain in the Archives until Saddam publicly burns the original on July 4, bringing Bill Clinton to his knees; T. Hamilton McKenzie, the Nobelist in plastic surgery (!) whose daughter is kidnapped to encourage him to rearrange Adams's face; William O'Reilly (``Dollar Bill''), nonpareil forger who copies the Declaration exactly and throws in a few near- copies for good measure; Johnny Sciasatore, distinguished director whose fake movie motorcade of the President helps get the imposter into the Archives; and a contract killer in Laura Ashley dresses who goes around mopping up the rest of the staff. The Skills crew gets the goods, of course, and then the ``Mission: Impossible'' scenario is reversed, as Scott Bradley, a Yale Law prof and CIA hanger-on, joins rookie Mossad agent Hannah Kopec (who already thinks she's killed Scott when his earlier cover as Mossad contact ``Simon Rosenthal'' was blown: don't ask) and a giant, custom-made safe named Madame Bertha to sneak the Declaration back out of Baghdad. With all those copies and all those agents plotting at cross-purposes, you just know there are going to be multiple switches and surprises, but instead of generating suspense, they just add to the general air of genial preposterousness. Undeniably entertaining, if you can get into the spirit of farcical and inconsequential melodrama. Maps of the Washington motorcade route and the Mideast—just in case you have any questions. (First printing of 500,000)