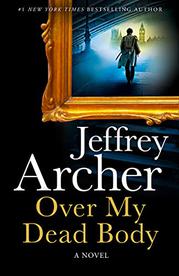 OVER MY DEAD BODY

Like a pair of Kabuki warriors or comic-book antagonists, DCI William Warwick and archcriminal Miles Faulkner return for yet another round of cat-and-mouse plotting and counterplotting.

Luxuriating with his wife, Beth, keeper of pictures at London’s Fitzmolean Museum, aboard the SS Alden, a liner bound for New York, William is disconcerted when Fraser Buchanan,  the chairman of the Pilgrim Line that owns the ship, dies during a meal. And he’s deeply chagrined when his attempts to prove that the patriarch was poisoned are short-circuited by a burial at sea he’s powerless to prevent. Fear not: This strangely extended prologue’s only connection to the main event is that when the Aldendocks in New York, William skips the wedding he and Beth have been invited to and hastens back to England alone because he's gotten word that Faulkner, reported dead at the end of Turn a Blind Eye(2021), may be enjoying a new life as Capt. Ralph Neville, who’s courting Christina Faulkner, his widow, so that he won’t have to let go of the art collection he left to her. Faulkner, who’s good at these things, slips out of the dragnet Scotland Yard has gathered around him before they can snap it shut, but the ongoing standoff between him and William is more dutiful than engaging. Luckily, longtime undercover DI Ross Hogan, whom retiring Cmdr. Hawksby is grooming as William’s second, develops an altogether more personal reason for going after Faulkner and, at long last, begins to litter the path he blazes to his quarry with the bodies of his agents.

The mixture as before, for those who want another round.