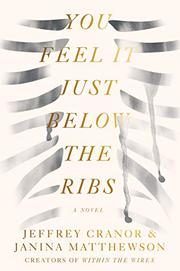 YOU FEEL IT JUST BELOW THE RIBS

A recovered manuscript details the establishment of the New Society after the ruinous Great Reckoning almost ends mankind—but does it describe a triumphant return to peace and equity or the desecration of that which makes us most human?

Dr. Miriam Gregory was a visionary psychologist whose research into the link between memory and trauma led to some of the foundational tenants of the New Society, the system of political and social governance that sprang up in the shambles left behind by the Great Reckoning. In 1977, she failed to return home from work and was not heard from again until her body was discovered in Stockholm in 1996.  Hidden under the floorboards of Dr. Gregory’s attic bedsit was a manuscript which, in spite of its incendiary nature, has been made available to a select few well-vetted readers in the name of free speech, the very manuscript the reader now holds in their hands. Dr. Gregory details her early life: the loss of her family, her adoption into a gang of similarly orphaned children, her specious arrest for treason, and her friendship with the ethereal Elsa. It is from Elsa that Dr. Gregory learns to enter a meditative trance state that allows the girls to remove themselves from the harsh environment of the Belgian prison in which they are both incarcerated. After Elsa’s presumed death in a prison riot, Dr. Gregory evolves the technique from meditation into a tool that can actually alter a subject’s relationship to the traumatic memories they carry within them. As her proficiency grows, however, Dr. Gregory’s research is put to uses she never intended. Eventually, her psychological treatments become the foundational tool for enacting the Age Ten Protocols, wherein children are separated from their families and conditioned to forget their emotional ties in an effort to eradicate all traces of the kind of tribal or national loyalties responsible for the Great Reckoning. Horrified by the application of her process, Dr. Gregory sets out to right some of the wrongs she has unwittingly helped create. The book as a whole fits into the universe of the authors' serial podcast Within the Wires, which also takes its form from the idea of found communication. Unsurprisingly, that sense of collaborative creation carries over, both in how Dr. Gregory’s memories intersect and sometimes refute the details of her history and in the technique of liberally footnoting the text with asides from fact-checkers and critics who warn the reader of the danger of taking Dr. Gregory’s word as law. The result is a fascinating layering of fiction, invention, satire, and social critique which explores much more than just the backstory of an alternative history.

A metatextual inquiry into the roots of human conflict that keeps its thread of tension taut throughout.