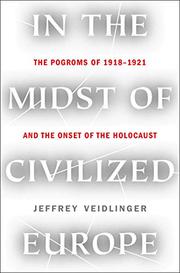 IN THE MIDST OF CIVILIZED EUROPE

A chillingly thorough study of how the Nazi extermination of Jews was foretold in Ukrainian pogroms 20 years earlier.

Based on extensive research in recently opened archives and newly available witness reports and trial records of the pogroms, Veidlinger—a professor of history and Judaic studies at the University of Michigan and winner of the National Jewish Book Award, among other honors—finds a predictable pattern of scapegoating of Jews for the perceived excesses of Bolshevism. As the author unequivocally shows, the cycle was repeated and expanded by the Nazis two decades later. At the end of World War I, Eastern European boundaries shifted, and Jews deported from the war were displaced. As the Russian Revolution provoked a civil war, tensions in Ukrainian communities were heightened, and Jews became the convenient scapegoats. Hopes for a Ukrainian republic were dashed by Bolshevik incursions, and “militias acting as part of the army of the Ukrainian People’s Republic initiated or authorized attacks on Jewish civilians” under the pretext that “the Jews were planning an uprising to install a Bolshevik government.” More than 100,000 Jews perished during the pogroms, which the author vividly depicts as “public, participatory, and ritualized.” He notes how early on, “they took place in a carnivalesque atmosphere of drunken singing and dancing; crowds allowed for a diffusion of responsibility, drawing in otherwise upright citizens and ordinary people who in different circumstances might not have joined the proceedings.” The White Army, composed of czarist remnants, also attacked the Jews as perceived allies of the Bolsheviks. Veidlinger also chronicles the international outcry at these pogroms, which helped to instigate important Jewish refugee relief programs while also hardening nations like the U.S. against allowing the immigration of desperate Jewish displaced persons. The last part of the book is an elucidating discussion of how the massive refugee problem galvanized the rise of right-wing politics, especially in Germany.

A vital history that draws a direct line from Eastern European antisemitic violence to the Holocaust.