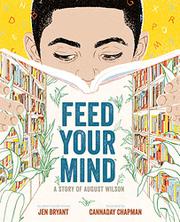 A Story of August Wilson

One of America’s greatest modern playwrights is introduced to generations of younger readers in this lyrical picture book.

August Wilson, the Pulitzer Prize–winning African American dramatist, is best known for his 10-play Century Cycle, which chronicles the African American experience through different decades in the 20th century. Because his work is targeted toward adults, many young readers might be unfamiliar with Wilson’s life or achievements. Thanks to this timely and elegant picture book, that oversight is now corrected. Conceptually separated into two acts, the book frames Wilson’s life as a play in free-verse form, immersing readers in the Hill District of Pittsburgh, a multiracial enclave where Frederick August Kittel Jr. is raised by his hardworking single mother. Act 1 chronicles Wilson’s search for his name and voice, and Act 2 showcases his extraordinary life’s work of using them to bring the African American experience to the stage. The book’s primary goal may be to present Wilson’s life, but it is also an eloquent love letter to literature and a celebration of its power to inspire, to instruct, and to provide hope, guidance, and direction. Bryant’s accomplished free verse and newcomer Chapman’s evocative, realistic illustrations operate in perfect synergy, celebrating the genius of Wilson the playwright while never losing sight of the complications, hardships, and imperfections of Wilson the man.