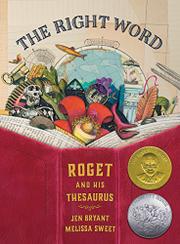 Roget and His Thesaurus

Born in London in 1779, Roget was plagued by lifelong setbacks. His father died early; his mother was unstable. Frequent moves and pronounced shyness engendered solace in books. Partial to classifying his knowledge and experiences, Peter composed his first book of lists by age 8. Inspired by the taxonomy of Swedish physician and botanist Linnaeus, teenage Peter studied medicine in Scotland, eventually establishing a practice in London, and he worked on a book of word classifications, completing it in 1805 for his own reference. Roget lectured, invented (the slide rule and the pocket chess set) and, inspired by the publication of several contemporary, inferior books of lists, returned to his own. His Thesaurus, published in 1852 and nurtured by his descendants, has never gone out of print. Bryant’s prose is bright and well-tuned for young readers. She goes gently, omitting Roget’s darkest traumas, such as witnessing his uncle’s suicide. Sweet tops herself—again!—visually reflecting Roget’s wide range as a thinker and product of the Enlightenment. Injecting her watercolor palette with shots of teal, scarlet and fuchsia, Sweet embeds vintage bits (ledger paper, type drawers, botanical illustrations and more), creating a teeming, contemplative, playfully celebratory opus. Exemplary backmatter includes a chronology, author’s and illustrator’s notes, selected bibliography, suggested reading, quotation sources, and a photograph of one of Roget's manuscript pages.