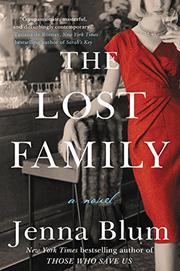 The devastation wrought by the Holocaust haunts a chef and his second family.

Blum’s (The Stormchasers, 2010, etc.) third novel is all about the occasionally dire consequences of seemingly innocuous choices. It has three sections, told successively from the third-person vantage point of New York chef Peter, his supermodel wife, June, and their teenage daughter, Elsbeth. Peter, a German-Jewish émigré and a survivor of Auschwitz, deeply regrets not having heeded warnings to get his parents, wife, and twin daughters out of Germany before it was too late. In the United States, he throws himself into running his restaurant, Masha’s, named after his wife, who disappeared, along with their daughters, during a Nazi roundup. Although Masha’s gains a modicum of acclaim (kudos from Craig Claiborne and regular patronage by Walter Cronkite), it ultimately falls victim to a clash between Peter and his wealthy cousin, Sol, his primary investor and only living relative. June, 19 years Peter’s junior, marries him on impulse and gives up her career, although her fame was approaching that of Twiggy. She grows frustrated trying to pierce Peter’s adamantine reserve and rebels with “women’s lib” consciousness-raising sessions and an affair with a Vietnam vet. She’s on the verge of leaving the marriage when Peter suffers a heart attack and must give up work. Elsbeth deals with weight issues, bulimia, her constant comparison of her looks with her mother’s, her father’s sudden decline, and her infatuation with a roué photographer in the Mapplethorpe mold. One of the principal pleasures here is the accurate period window dressing of mid-1960s New York City, '70s New Jersey, and the '80s Manhattan punk world. The writing, evocative yet unassuming, conveys the interiority of the characters, even the minor ones, elevating them beyond the stereotypical. The emphasis here is not on Nazi atrocities, which are only hinted at, but on surviving the banality of domineering relatives, bad marital choices, suburban mores, and body-image woes.

An unsentimental, richly detailed study of loss and its legacy.