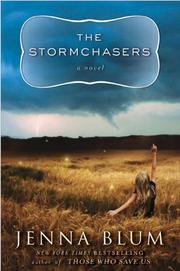 A somber, effective portrait of twins—of the strength they gain and the harm they do to one another.

Karena hasn’t seen her twin Charles in 20 years, since he was 18 and briefly committed to a psychiatric ward for his bipolar disorder. Now on their birthday, it seems both surprising and perfectly natural that she should receive a call from a mental-health clinic in Kansas. After years of trying, she has found Charles, the joyous other half of herself, and also the source of her guilt. She leaves Minneapolis the next day but is crushed to discover he’s checked himself out. As Charles is a lifelong stormchaser (in fact his published photographs of tornados are the only evidence Karena has had over the years that he’s still alive), Karena decides to join a storm-chasing tour. A staff reporter for a Minneapolis paper, Karena uses the story she is writing about summer stormchasers as a cover to question everyone she meets for information on Charles. Along the way Karena begins a relationship with Kevin, one of the tour operators, who was once close friends with Charles but, like Karena, was banished when Kevin had Charles hospitalized for dangerous behavior. Kevin and Karena survive an almost fatal storm, and just as the tour ends, there’s a miracle at the end of the rainbow—Karena finds Charles, who was close by all the time (in fact, during his 20-year absence he has kept tabs on Karena) and ready to go home. The narrative steps back to their 18th birthday and the events that drove them apart—his mania and suicidal depression, a storm, an accident, a murder, a guilty secret that has haunted them for 20 years. Charles’ storminess (he imagines his illness like a storm, a natural, neutral phenomenon) is beautifully rendered—Blum offers a meticulous portrait of bipolar disorder and the heartbreaking damage it does to those it affects.

A strong second novel from bestseller Blum (Those Who Save Us, 2004, etc.).