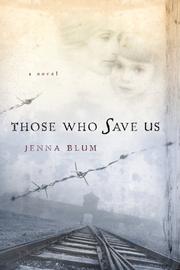 THOSE WHO SAVE US

An emotionally estranged mother and daughter are reconciled when the daughter learns the truth about her German mother’s actions in WWII.

Blum, who is half-Jewish and of German descent, worked for Steven Spielberg’s Shoah Foundation as an interviewer of Holocaust survivors—and her first fiction is suffused with details about life in wartime Germany, where her protagonists Anna Schlemmer and her daughter Trudy were both born. Trudy, now a professor of German history in the Twin Cities, is divorced and, as an only child, is responsible for Anna, who has to be put in a home soon after the death of her husband Jack, the American soldier she married at war’s end. Anna rarely talks, and Trudy, who has seen a picture of her mother with a Nazi officer and a young Trudy, believing herself his daughter, is deeply ashamed. The two women tell their separate stories here as Trudy starts work on a project that involves interviewing Germans who were in Germany during the war. Anna recalls how, at 19, and living at home with her Nazi father in Weimar, she met Jewish doctor Max Stern. She hid him in her house, but Max was discovered. Anna, pregnant with Max’s child, moved in with Mathilde, a baker helping the Resistance. After daughter Trudy was born in 1940, Anna also began working for the Resistance, delivering bread to a nearby camp for officers and retrieving hidden messages on the way home. But when she witnesses a brutal killing by Horst, an officer at the camp, and was seen by him, she became his mistress in order to save Trudy’s life. Trudy finally learns the truth of her paternity—but her mother’s long and insufficiently motivated silence about it isn’t persuasive.

An ambitious but flawed first outing.