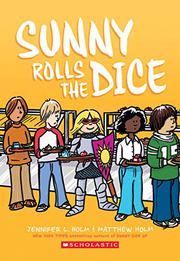 From the Sunny series, volume 3

Sunny, in seventh grade, finds her score on the Groovy Meter taking some wild swings as her friends’ interests move in different directions.

In a motif that haunts her throughout, Sunny succumbs to a teen magazine’s personality quiz and sees her tally seesaw radically. Her BF Deb has suddenly switched focus to boys, clothes, and bands such as the Bee Gees (this is 1977)—dismissing trick-or-treating and wearing galoshes on rainy days as “babyish.” Meanwhile, Sunny takes delight in joining nerdy neighbors Lev, Brian, and Arun in regular sessions of Dungeons and Dragons (as a fighter character, so cool). The storytelling is predominantly visual in this episodic outing, with just occasional snatches of dialogue and pithy labels to fill in details or mark the passage of time; frequent reaction shots deftly capture Sunny’s feelings of being pulled this way and that. Tellingly, in the Holms’ panels (colored by Pien), Sunny’s depicted as significantly smaller than Deb, visually underscoring her developmental awkwardness. Deb’s comment that “we’re too old to be playing games like that” leads Sunny to drop out of the D&D circle and even go to the school’s staggeringly dull spring dance. Sunny’s mostly white circle of peers expands and becomes more diverse as she continues to navigate her way through the dark chambers and misty passages of early adolescence. Lev is an Orthodox Jew, Arun is South Asian, and Regina, another female friend, has brown skin.

The dice are rolling readers’ way in this third outing.