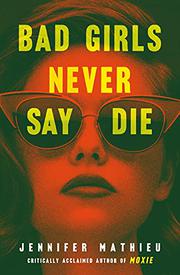 For “bad girls,” hell can be a place on Earth.

In Houston in the early ’60s, girls only seem to have two choices: be a good girl and get married or be a bad girl and live your life. Fifteen-year-old Evie, from a working-class White family, became a bad girl after her sister’s shotgun wedding took her away from home. Mexican American neighbor Juanita, who smokes, drinks, wears intense eye makeup, and runs with the tough crowd, takes Evie under her wing, but despite the loyalty of this new sisterhood, Evie often feels uncertain of her place. When a rich girl from the wealthy part of town named Diane saves Evie from assault by killing the attacker, Evie finds a new friend and, through that friendship, discovers her own courage. This work borrows a few recognizable beats from S.E. Hinton’s 1967 classic, The Outsiders—class tensions, friendship, death, and a first-person narrative that frequently employs the word tuff—but with a gender-swapped spin. Overall, the novel would have benefited from a stronger evocation of the setting. During an era of societal upheaval, Evie struggles to reconcile her frustration at the limited roles defined for her and her friends, with many moments of understanding and reflection that will resonate with modern readers’ sensibilities—although sadly she still victim blames herself for the attempted assault.

Stronger books may exist about the 1960s, but female friendship tales never go out of style.