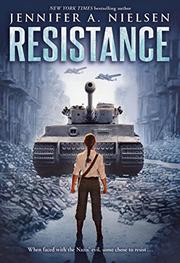 A Jewish girl joins up with Polish resistance groups to fight for her people against the evils of the Holocaust.

Chaya Lindner is forcibly separated from her family when they are consigned to the Jewish ghetto in Krakow. The 16-year-old is taken in by the leaders of Akiva, a fledgling Jewish resistance group that offers her the opportunity to become a courier, using her fair coloring to pass for Polish and sneak into ghettos to smuggle in supplies and information. Chaya’s missions quickly become more dangerous, taking her on a perilous journey from a disastrous mission in Krakow to the ghastly ghetto of Lodz and eventually to Warsaw to aid the Jews there in their gathering uprising inside the walls of the ghetto. Through it all, she is partnered with a secretive young girl whom she is reluctant to trust. The trajectory of the narrative skews toward the sensational, highlighting moments of resistance via cinematic action sequences but not pausing to linger on the emotional toll of the Holocaust’s atrocities. Younger readers without sufficient historical knowledge may not appreciate the gravity of the events depicted. The principal characters lack depth, and their actions and the situations they find themselves in often require too much suspension of disbelief to pass for realism.

Sensitive subject matter that could have benefited from a subtler, more sober touch.