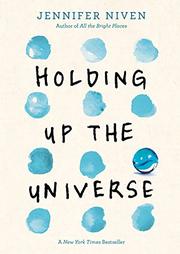 HOLDING UP THE UNIVERSE

Love blooms between two teens—a white girl who refuses to be judged and a biracial boy who hides himself from judgment.

Libby Strout was once America's Fattest Teen, whose house had to be cut open to allow her to be taken to the hospital. After three years of weight loss and counseling, Libby's returning to school, where Jack Masselin is the big man on campus. Full of swagger and the life of the party, Jack has developed this persona to hide the truth about himself: he can't recognize faces due to a condition known as prosopagnosia—he doesn't even recognize himself except by his Afro. When Jack grabs Libby in a cruel “game” called Fat Girl Rodeo, she punches him in the mouth, and they both wind up in group counseling. Spending time together will inspire each of them to become stronger, and slowly a kind of friendship develops that turns into more. The narration alternates between the two, effectively getting readers into both kids’ heads. The discomfort and fear that Jack feels come through clearly, as he constantly rehearses the “identifiers” of everyone he knows in order to avoid embarrassing mistakes, as do Libby's particular anxieties: will she get stuck behind her desk? Will her peers ever see her for herself?

More a story about falling in love with yourself than with a romantic interest, this novel will resonate with all readers who’ve struggled to love themselves.