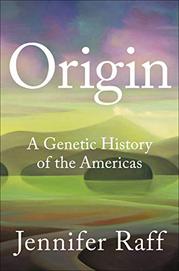 A Genetic History of the Americas

A stroll through the history of the early peopling of the Americas, blending ethnography, paleontology, and genetics.

Raff, a geneticist and professor of anthropology, opens with the discovery of ancient human bones in a cave in the Pacific Northwest, a discovery that, not long ago, would have occasioned the descent of a swarm of archaeologists to excavate—never mind the wishes of the Indigenous people nearby. Now those Native people—in this case, Tlingit and Haida—are involved, deliberating how to approach the study of the bones. In this instance, the remains supported their beliefs “that their ancestors were a seafaring people who have lived in this region since the dawn of history.” At least one wave, perhaps the earliest, of humans in the Americas was made up of people from northeastern Asia who traveled on open water well before most current chronologies begin. Such facts are adduced by archaeological fieldwork but also by ethnographers beginning to pay closer attention to Indigenous origin stories and by scientists working in labs to sequence DNA, extracting it from long-buried bone. Raff writes clearly and well, but sometimes we encounter knotty technical problems, as with her formulation, “X2a is of a comparable age to other indigenous American haplogroups (A, B, C, D), which would not be true if it were derived from a separate migration from Europe.” Along the way, the author raises as many questions as she answers. So-called Kennewick Man, hailed by White supremacists a quarter-century ago as proof that Europeans got to the Americas first, is certainly ancestral to Native people, for one: “There is no conceivable scenario under which Kennewick Man could have inherited just his mitochondrial genome from Solutreans but the rest of his genome from Beringians.” So where did he come from? Readers with a bent for human origin studies will enjoy puzzling out such things with Raff.

A sturdy, readable contribution to the library of Indigenous origins and global migrations.