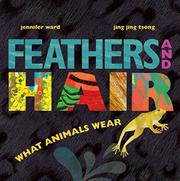 FEATHERS AND HAIR, WHAT ANIMALS WEAR

The colors, shapes, and textures of the artwork are a glorious complement to the simple, nicely scanning, just-barely-informational text. A set of speckled feathers stretching over the title pages is revealed to be the tail feathers of an awesome, pheasantlike bird spread over the next two pages. The text states, in bright, large letters against a green background, “Some animals wear feathers.” A monkey leaps across the next pages, with the bold text: “Some animals wear hair.” An aerial view of a porcupine’s quills finishes the verse with “Some animals wear prickly spines / and roam without a care.” The art invites gazing and revisiting—especially the four pages devoted to a chameleon of psychedelic coloration. The final verse and illustration of a giggling, brown-skinned child in the bathtub will delight most toddlers—who are still entranced by differences between humans and other animals—but limit the book’s appeal to older readers. The endnotes name each animal in its order of appearance and supplement the primary text with scientific facts. However, the absence of a glossary leaves it up to adult readers to define such terms as “mammal,” “reptile,” “gills,” “crustacean,” “mollusk,” and “amphibian.”

The artwork is spectacular, but its factual content is not so well-presented.