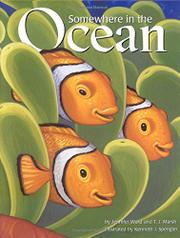 SOMEWHERE IN THE OCEAN

The authors give new lyrics to the familiar rhyming folksong `Over in the Meadow,` here counting ocean mothers and their offspring one to ten from manatee to octopus. Some rhymes seem forced, but young listeners will still enjoy chanting along: `Somewhere in the ocean where the seas and rivers mix / lived a mother tiger shark and her little pups SIX. / `Cruise!` said their mother. `We cruise!` said the six, / so they cruised and they hunted where the seas and rivers mix.` The authors conclude with `fun facts` about the animals and a simplified musical score for the folk song. Facts are neither scientific nor specific enough to be very helpful. For example, `sea turtles—some sea turtles grow to be really big, bigger than a really big man.` How big is that? The illustrations are big, bright, and slightly cartoonish. All these creatures are smiling, and octopus, hermit crabs and others have excessively goggly eyes. The endpapers invite viewers to look for hidden numbers in the illustrations, but they are not easy to find. A counting book with an ecology message with a modicum of appeal. (glossary, musical score) (Nonfiction. 3-6)