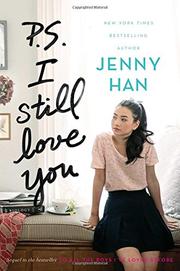 P.S. I STILL LOVE YOU

From the To All the Boys I've Loved Before series, volume 2

In the wake of the events detailed in To All the Boys I Loved Before (2014), Lara Jean confesses her love for handsome golden boy Peter. This frees the pair to start a romantic relationship with a clean slate, but over the course of the novel it becomes clear that embarking on a relationship that turns an aggressive blind eye to baggage is never a good idea. When a viral video of a steamy love session between Peter and Lara Jean rears its ugly head and a boy from the past enters Lara Jean's life once more, Lara Jean's life gets complicated. Every character from Han’s adored previous novel is back, with new dimensions given to nearly every one of them. Subplots abound, among them two involving Lara Jean's father and Peter's ex-gal Genevieve, but benefitting most from this second look is John Ambrose McClaren, a boy briefly referenced in the former book who is thrust into the spotlight here as Peter's rival for Lara Jean's heart. With all these characters bouncing around, Han occasionally struggles to keep a steady hand on the novel's primary thrust: Lara Jean’s emotional development. Han gets the job done in the end, but this overeventful sequel pales to the original where structure is concerned. The author's greatest success remains her character work, and the book does indeed give everyone a solid arc, narrative be damned.