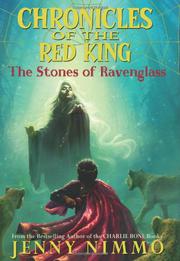 THE STONES OF RAVENGLASS

From the Chronicles of the Red King series, volume 2

A prequel spun off from the Charlie Bone series slogs through a second episode hobbled by an unwieldy cast, a Eurocentric attitude, and convenient magic that overcomes all obstacles without much ado.

The British castle that the 200-year-old preteen and future Red King Timoken had thought a new home in The Secret Kingdom (2011) has turned instead into a prison. There’s nothing for it but to fly off atop his mild-mannered camel Gabar in search of a site where he can build a castle of his own. They acquire a crusty Merlin-esque wizard, a chubby dragon and over a dozen fugitive children as companions on the way and are later joined by more characters from the opener. With their help, he fends off repeated attacks from malign spirits and mailed “conquerors,” while constructing a luxurious palace overnight with help from “spirit ancestors.” Though neatly folding in connections between Timoken and his distant descendant Charlie, Nimmo endows her protagonist with such overwhelming powers that all the threats and tasks with which he is faced are but momentary challenges, quickly dealt with. More problematically, in a doubtless well-meant but parochial effort to distinguish Timoken from the general herd of boy wizards the author repeatedly dubs him a generic “African”—and even describes his palace as “more African than British,” whatever that means.

A weakly plotted, overpopulated and only fitfully suspenseful follow-up.