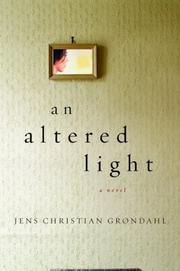 A marriage crumbles after 30 years, allowing the wife to find her own identity at last in this elegiac, maturely affecting work from the masterly Danish novelist (Lucca, 2003, etc.).

The discovery of a conversation recorded by accident (or was it?) on their phone machine between her banker husband, Martin, and his lover, Susanne, does not surprise 56-year-old Irene Beckman, a Copenhagen divorce lawyer. Apparently she never loved Martin, nor did she dwell that much on her marriage, being of a rather skeptical, diffident nature. She even enjoyed an affair of her own some years back. Irene says nothing, until sometime later when Martin announces at the dinner table in front of their grown children, Josephine and Peter, that he’s going to live with the other woman. Curiously, their marriage is the last to disintegrate among their crowd, who lived through a turbulent, revolutionary era. Nonetheless, Irene feels bewildered and angry. With Martin’s exit, she’s finally forced to try to understand herself, further prodded by a notebook thrust upon her by her hospitalized mother, Vivian. Written just after the birth of Irene and her twin brother (who died), the notebook reveals that Irene’s real father is a Russian-Jewish cellist named Samuel Balkin, who left for Sweden during WWII and didn’t return until after Vivian had married someone else. Unhinged by her “strange sense of freedom,” Irene sets off by car to search for Balkin in Vienna, where a strange, bittersweet reunion ensues. Grøndahl makes some lengthy, sinuous digressions into various tertiary characters’ backgrounds and suggests a bit heavy-handedly that Irene has subconsciously sought her twin in her lovers. Yet by the end of this quietly emotive, intelligent work, the reader is exhausted and transformed.

Should help to consolidate Grøndahl’s following among English-speaking readers.