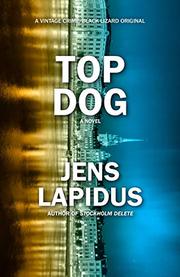 Talk about your star-crossed lovers. When Lapidus reunites Teddy Maksumic, who served eight years for a kidnapping he didn’t commit, with newly independent lawyer Emelie Jansson, it’s every man, woman, and child for themselves.

Tossed out of her white-shoe firm for her part in the earlier case (Stockholm Delete, 2017), Emelie’s in a perfect position to take a pleading phone call from a young woman she knows only as Katja, who’s survived a long series of sexual abuses beginning when she was 13 only to face a new horror: Chief Inspector Nina Ley’s demand that she detail every outrage she suffered so that Ley can bring her abusers to justice. Katja’s situation is so harrowing that it’s practically a mercy when she’s stabbed to death soon after Ley begins interrogating her with Emelie at her side. Meanwhile, Teddy’s nephew, Nikola, finds his resolve to avoid his uncle’s criminal career complicated by the murder of his best friend, Chamon Hanna—a crime that demands revenge more personal and effective than the legal system can provide. And Iranian party girl Roksana’s housewarming party to celebrate her cohabitation with Z, the boyfriend who’s moved in with her, turns into a once-in-a-lifetime lark when they discover several kilos of ketamine hidden behind a false wall in their new digs, then into a nightmare when the drug lord from whom it was taken demands an impossible payment for the goods. As in his Stockholm Noir trilogy, Lapidus plots on an epic scale; if you think one plotline is beginning to flag, just wait for new details about his double-crossing gangsters, his two-faced socialites, and his hard-used heroine and her unlikely swain. Even better, he produces a climactic surprise that really does tie many of the strands of this untidy saga together.

Part sequel, part rehash of unfinished business from Stockholm Delete. As in Faulkner, the past in Lapidus isn’t even past—and although it’s not dead, it’s more than capable of killing the living.