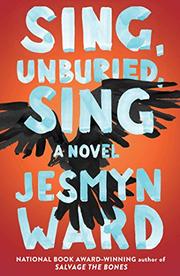 The terrible beauty of life along the nation’s lower margins is summoned in this bold, bright, and sharp-eyed road novel.

In present-day Mississippi, citizens of all colors struggle much as their ancestors did against the persistence of poverty, the wages of sin, and the legacy of violence. Thirteen-year-old Jojo is a sensitive African-American boy living with his grandparents and his toddler sister, Kayla, somewhere along the Gulf Coast. Their mother, Leonie, is addicted to drugs and haunted by visions of her late brother, Given, a local football hero shot to death years before by a white youth offended at being bested in some supposedly friendly competition. Somehow, Leonie ends up marrying Michael, the shooter's cousin, who worked as a welder on the ill-fated Deepwater Horizon oil rig. The novel’s main story involves a road trip northward to the Mississippi State Penitentiary, where Michael’s about to be released from prison. Leonie, very much a hot mess, insists on taking both children along to pick up their father even though it’s clear from the start that Jojo—who's more nurturing to his sister than their mother is—in no way wants to make the journey, especially with his grandmother dying from cancer. Along the way, Jojo finds he’s the only one who sees and speaks to another spirit: Richie, an ill-fated friend of his grandfather’s who decades before was imprisoned at a brutal work camp when he was slightly younger than Jojo. Ward, a National Book Award winner for Salvage the Bones, (2011), has intimate knowledge of the Gulf Coast and its cultural complexities and recounts this jolting odyssey through the first-person voices of Jojo, Leonie, and occasionally Richie. They each evoke the swampy contours of the scenery but also the sweat, stickiness, and battered nerves that go along with a road trip. It’s a risky conceit, and Ward has to work to avoid making her narrators sound too much like poets. But any qualms are overpowered by the book’s intensely evocative imagery, musical rhetoric, and bountiful sympathy toward even the most exasperating of its characters. Remorse stalks the grown-ups like a search party, but grace in whatever form seems ready to salve their wounds, even the ones that don’t easily show.

As with the best and most meaningful American fiction these days, old truths are recast here in new realities rife with both peril and promise.