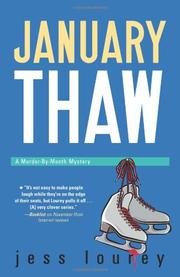 If it’s January in Minnesota, it must be time for amateur sleuth Mira James to find another corpse.

It’s a pretty decent life Mira has made for herself in the village of Battle Lake (population 747) as the head librarian, a part-time reporter and a not-yet-licensed detective—if you don’t count her habit of stumbling across corpses on a regular basis. Her most recent find is a frozen body near the dunking hole for the Winter Wonderland Festival. What makes the discovery more poignant is that the deceased, Maurice Jackson, tried to rescue Mira and her man-hungry octogenarian assistant, Mrs. Berns, from two of his fellow gang members. A letter that a possible ancestor of Maurice’s wrote in 1865 compels Mira to dig more deeply to find out what really brought Maurice to Battle Lake. In addition, she takes on a case involving a missing descendant of the original owner of Prospect House, a mansion-turned–Civil War museum, and tangles with the police chief, the Battle Lake mayor/pet psychologist and her narcoleptic dachshund, and an ex-boyfriend who stirs up needless trouble between Mira and her current squeeze—not to mention that Prospect House ghost. You have to wonder what Mira will do when she runs out of calendar months. Marry her perfect boyfriend and get out of the beleaguered police chief’s way?

Lourey (December Dread, 2012, etc.) has a feel for small-time life but not for when to stop introducing whackadoodle eccentrics who are not so much comic as annoying.