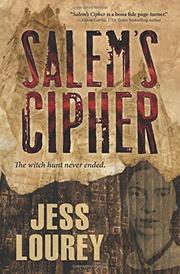 Circumstances force a pair of best friends to take on a dangerous quest.

Salem Wiley and Isabel "Bel" Odegaard are lifelong friends despite their differences. Salem is a brilliant loner, with degrees in computer science and mathematics, who lives in Minneapolis, specializes in cryptanalysis, but is terrified of new places. Only a rigid schedule makes her feel secure. Bel is a stunning Chicago cop who’s a few years older and much tougher. One night Salem gets a late-night call from Bel—there's been a bloody crime in Bel's mother Grace's Minneapolis apartment. Grace is missing, and her neighbor is dead. Meeting Bel and the police in Grace's apartment, Salem finds a wooden box that she'd made for her own mother, Vida, years ago—and Vida turns out to be missing, too. The only clue on the scene is a sliced-off finger. FBI agent Lucan Stone knows but doesn’t reveal that this is just the latest in a series of murders the press has not connected because of all the hype surrounding a female presidential candidate, Minnesota senator Gina Hayes. Salem finds a coded note in her mother's box but keeps it from the police. When Salem decodes the note, it reads: “Talk: to Keller about Revenge then go home follow the trail trust no one.” This initial hint sends the pair on a dangerous hunt and reveals much they didn’t know about their families. Their mothers are part of a large group of women who have been fighting a powerful collective known as the Hermitage for hundreds of years. The Hermitage, who’ll do anything to keep women subjugated, sets assassins on Salem's and Bel’s trails and plans to kill Sen. Hayes. Salem’s skills send the pair hunting all over the country. Desperate to discover the fates of their mothers, Salem and Bel must depend on luck and some newfound friends as they strive to unlock the secrets of the past and present.