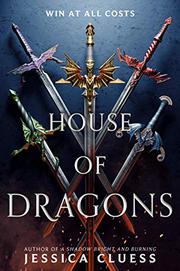 From the House of Dragons series, volume 1

In a world dominated by order, chaos threatens to upend tradition when unlikely competitors are chosen to fight for the throne.

Emperor Erasmus is dead, leaving the Great Dragon to decide the future of the Etrusian Empire. Traditionally, the oldest child from each of the five Houses and his or her dragon compete for the throne. However, this time outsiders are called to compete: Chara and her rider, Emilia, youngest daughter of House Aurun, who holds the magic of chaos; Tyche and her rider, Lucian, reformed warrior of House Sabel; Karina and her rider, Vespir, the lowborn, lesbian servant girl and dragon handler of House Pentri; Dog and his rider, Ajax, the wily illegitimate son of House Tiber; and Minerva and her rider, Julia, who are challenged by Hyperia, who believes the throne is her birthright, and her feral dragon, Aufidius. During the stages of the Emperor’s Trial—the Hunt, the Game, the Race, and the Truth—each competitor faces their own personal weaknesses. Multiple perspectives create depth in this complex fantasy world with flawed human characters who have murder, destruction, thievery, and cowardice in their backgrounds. Cluess’ dragons have unique personalities and voices of their own, becoming as central to the story as their human riders. Most characters are cued as white; blonde hair and blue eyes are valorized. Vespir’s lesbian identity is neatly and naturally woven into her character.