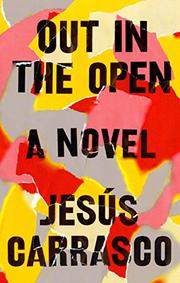 OUT IN THE OPEN

A stark debut novel details a young boy’s flight from danger across a desiccated, dangerous land.

Carrasco’s unnamed protagonist begins his journey cowering in an olive grove while men shout his name. “He had caused an incident” at home, necessitating his escape. He is left entirely alone, and "the black flower of his family’s betrayal still gnawed at his stomach.” Details of this incident are mysterious to the reader, but the boy sets out in haste across a severe and drought-stricken plain. He doesn’t bring adequate provisions for the arduous trip, and soon hunger overtakes him. A world-weary goatherd he encounters offers food and protection, eventually becoming the boy’s mentor. Spare in dialogue but lush in cinematic description, Carrasco’s novel (as translated by Costa) draws on old archetypes of journey and mentorship, depicting beauty in the gaunt, nameless landscape as well as the relationship between the man and the boy. “There was a time when the plain had been an ocean of wheat fields...fragrant green waves waiting for the summer sun,” Carrasco writes. “The same sun that now fermented the clay and ground it down to dust.” The boy and goatherd fight to stay just ahead of danger, but they do so beneath “stars…like jewels encrusted in a transparent sphere.” There is an urgency to the boy’s escape; at night he “dreams he’s being pursued. The usual dream. He’s running away from someone he never sees, but whose hot breath he can feel on his neck.” The goatherd teaches the boy his ascetic ways, and the boy searches for the confidence to outsmart the men who rabidly chase him. In this tale about becoming a man, it is clear that confronting one’s own demons is as important as outwitting the danger that lurks in the dark.

Harshly and elegantly told; a quest that feels both old and new.