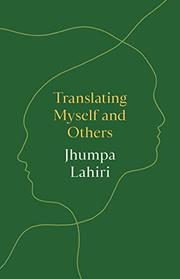 TRANSLATING MYSELF AND OTHERS

The acclaimed author and translator offers thoughts on the latter art and craft.

A Pulitzer Prize–winning author of fiction in English, Lahiri moved to Rome in 2012 to immerse herself in Italian. Since then, she has published both a memoir and fiction in Italian and translated several works from Italian to English. This volume collects several pieces written over the past seven years—her translators’ notes to the novels Ties (2017), Trick (2018), and Trust (2021) by Italian writer (and friend) Domenico Starnone; stand-alone essays; and lectures and addresses—as well as an original introduction and afterword. A few themes emerge: Lahiri frequently returns to Ovid and Metamorphoses, most notably in her lecture “In Praise of Echo” and her moving afterword, which recounts her process of translating Ovid as her mother declined and died; metaphors of immigration and migration—Lahiri is both the daughter of Bengali-speaking Indian immigrants and an immigrant herself, twice over—ground other musings. Possibly the most provocative piece is “Where I Find Myself”—on the process of translating her own novel Dove mi trovo, from the original Italian into English as Whereabouts (2021)—an essay that finds her first questioning the ethics of self-translation (probed with a surgical metaphor) and then impelled to make revisions for a second Italian edition. The weakest essay is “Traduzione (stra)ordinaria / (Extra)ordinary Translation,” an appreciation of Italian revolutionary and thinker Antonio Gramsci, whose Letters From Prison reveal a linguist as ferociously compelled to investigate the process of translation as Lahiri herself. Composed originally as remarks for a panel, it reads like an elegantly annotated list of bullet points that will have readers wishing Lahiri had revised it into a cohesive essay. Readers may also find themselves envious of the author’s students of translation at Princeton, but this sharp collection will have to do. Two essays originally composed in Italian are printed in the original in an appendix.

A scrupulously honest and consistently thoughtful love letter to “the most intense form of reading…there is.”