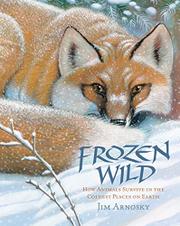 How Animals Survive in the Coldest Places on Earth

Continuing his exploration of the world around us, a wildlife artist takes readers to icy polar habitats far from his Vermont home.

Chapter by chapter, Arnosky introduces animals who thrive in spite of the cold: under the ice and over the snow in northern winters and in the Arctic and Antarctic. Acrylic paintings spread across the expanse of fold-out pages, adding to readers’ feelings of immersion in these unfamiliar environments. The animals are shown in groups that would be unlikely in the wild, as when a polar bear and walrus look over the edge of an ice floe as a narwhal, beluga, and harbor seal swim nearby. These make for interesting comparisons. Shaded pencil drawings illustrate simple explanations of the reasons for seasons, the inhospitable climates of polar regions, and some of the adaptations that make animal survival possible. Even more than in Tooth and Claw (2014) and similar titles, the artist based his illustrations on photographs from reference books and pictures of animals in captivity, but in an author’s note he reminds readers that some animals pictured migrate long distances and might also be seen in more temperate climes. With short descriptions filled with the kinds of details that intrigue young readers, he invites his audience to further explorations.

A welcome addition to the eye-catching series that began with Wild Tracks (2008).