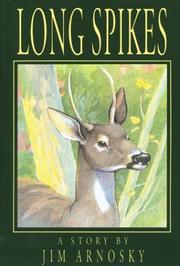 In early spring, yearling fawns Long Spikes and his sister lose their mother to coyotes, led by a wily female with a hooked fang. Making their way back to their birth thicket, the orphans find temporary safety. Time passes; a beaver entices a mate, and the thicket is flooded; a bobcat slinks by. Summer becomes fall, and the deer are joined by twin does. The does band; Long Spikes comes into rut and desperately follows them, mating with one of the twins. An older stag who easily dominated Long Spikes during mating season is killed by hunters. Long Spikes survives the hunting season and winter's snow and ice, but nearly falls prey to the coyote that killed his mother. The cycle begins again. Using a simple, descriptive style plus eight straightforward pencil drawings, Arnosky has tried to keep the narrative true to animal behavior and free of any human values, anthropomorphism, or cuteness; by and large, he succeeds admirably. Readers conditioned by the heavy hand of the media might ask, ``Is that all there is? Life and death, mating, survival, and contentment?'' Well, yes. Young readers who can perceive the drama in this simple story will be the wiser for it. (Fiction. 10+)