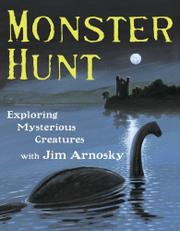 Stating that “[t]oday's mystery could be tomorrow's science,” a veteran wildlife observer ponders the existence of such legendary creatures as Bigfoot and the Loch Ness monster.

Arnosky’s introduction provides a scientific name for the search for animals whose existence is unproven—cryptozoology. In brief chapters, he discusses giant sharks called charcharodon, thought to be extinct; giant squids or kraken, only recently discovered in the ocean depths; Bigfoot and similar creatures that might lurk in North American forests; and the Loch Ness monster, a possible plesiosaur still surviving in Scotland. But the meat of this latest title is his description of an expedition with his wife and three grandsons to search the depths of Lake Champlain for “Champ,” a plesiosaurlike reptile possibly living in the waters between New York and Vermont. Realistic paintings spread across the gutters, bounded with a totemlike border made up of further relevant images in natural colors. For example, alongside an illustration of a silverback gorilla (thought to be imaginary until the 19th century), the border depicts a coelacanth and a Komodo dragon. Double-page spreads indicate changing sections. Straddling the line between acceptance and disbelief, the naturalist leaves the question of Champ’s existence open for readers, reminding them that when science solves one mystery, another may appear.

This personal look at a popular subject is sure to please. (Informational picture book. 7-10)