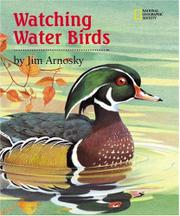 A cross between a naturalist's diary of backyard observations and a guide to identifying water birds, for newcomers or for pint-sized veterans of duck-feeding at the local pond. Arnosky (Rabbits & Raindrops, 1997, etc.) collects a random assortment of typical water fowl, based on personal sightings, and accompanied by sketches, notes, and full-color, actual-size portraits of a few favorites. Useful identification tips highlight dissimilarities between loons and grebes, geese and ducks, male and female of each species. One exception is the omission of visual references to egrets in their comparison with herons. Arnosky's distinctions include differences in flight characteristics, coloring and markings, and habitat selection, which sharpen the focus to an untrained eye. Birds are depicted in flight or underwater as well as coming in for a landing or gliding on water. A splash of facts inserted in side panels show such things as the mallard's habit of ``tipping up'' or where the female's wings are tucked when not in flight. In an easy conversational style, Arnosky explains just how a seagull spots the sparkling broadsides of fleeing fish underwater. Remarking on his own drawings, the author encourages readers to copy his illustrations in addition to sketching birds outdoors, taking this bird lesson a step beyond mere identification. (Picture book/nonfiction. 5-10)