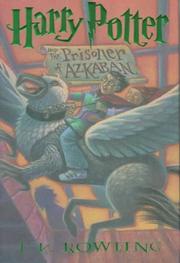 HARRY POTTER AND THE PRISONER OF AZKABAN

From the Harry Potter series, volume 3

The Harry Potter epic (Harry Potter and the Chamber of Secrets, p. 888, etc.) continues to gather speed as Harry enters his third year at the Hogwarts School for Witchcraft and Wizardry and does battle with the traitor behind his parents’ deaths.

Besides coping with the usual adversaries’sneering classmate Draco Malfoy, evocatively-named Potions Master Snape—the young wizard-in-training has a new worry with the escape of Sirius Black, murderous minion of archenemy Lord Voldemort, from the magicians’ prison of Azkaban. Folding in subplots and vividly conceived magical creatures—Azkaban’s guards, known as dementors, are the very last brutes readers would want to meet in a dark alley—with characteristic abandon, Rowling creates a busy backdrop for Harry as she pushes him through a series of terrifying encounters and hard-fought games of Quidditch, on the way to a properly pulse-pounding climax strewn with mistaken identities and revelations about his dead father.

The main characters and the continuing story both come along so smartly (and Harry at last shows a glimmer of interest in the opposite sex, a sure sign that the tides of adolescence are lapping at his toes) that the book seems shorter than its page count: have readers clear their calendars if they are fans, or get out of the way if they are not.