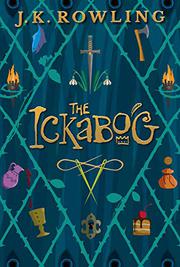 Rowling buffs up a tale she told her own children about a small, idyllic kingdom nearly destroyed by corrupt officials.

In the peaceful land of Cornucopia, the Ickabog has always been regarded as a legendary menace until two devious nobles play so successfully on the fears of naïve King Fred the Fearless that the once-prosperous land is devastated by ruinous taxes supposedly spent on defense while protesters are suppressed and the populace is terrorized by nighttime rampages. Pastry chef Bertha Beamish organizes a breakout from the local dungeon just as her son, Bert, and his friend Daisy Dovetail arrive…with the last Ickabog, who turns out to be real after all. Along with full plates of just deserts for both heroes and villains, the story then dishes up a metaphorical lagniappe in which the monster reveals the origins of the human race. The author frames her story as a set of ruminations on how evil can grow and people can come to believe unfounded lies. She embeds these themes in an engrossing, tightly written adventure centered on a stomach-wrenching reign of terror. The story features color illustrations by U.S. and Canadian children selected through an online contest. Most characters are cued as White in the text; a few illustrations include diverse representation.

Gripping and pretty dark—but, in the end, food, family, friendship, and straight facts win out over guile, greed, and terror.