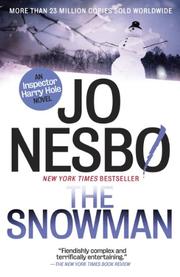 by Jo Nesbø and translated by Don Bartlett

Oslo detective Harry Hole returns, world-weary as ever, to puzzle out some very strange, and very discomfiting, events. The opening is very Scandinavian indeed: two people not married to each other are experiencing some extracurricular bliss—the Erica Jong part—when one notices that they’re being watched, whereupon the woman’s kid, waiting in a car in the wintry outside—the Scandinavian part—informs his mom, “We’re going to die”—and not just because Ronald Reagan has just been elected. The thing is, it’s a snowman that’s doing the watching, and from that fact no good thing can emerge. Nesbø is to be complimented: It’s one of the creepiest opening scenes in recent memory, even if the lovemaking has a sort of late-1970s West German soft-porn feel to it. Fast-forward 24 years, when the Norwegians are worried about Dubya, and Hole is on the case of more snowman hijinks, helped along by his fellow officers of the Politioverbetjent (the Crime Squad, that is), one of whom is “attractive without trying” and makes a fine lure for mayhem. Things get creepier as the scene shifts from substation to plastic surgeon’s office to coroner’s gurney, when Harry announces, “I just have the feeling that someone is watching me the whole time, that someone is watching me now. I’m part of someone’s plan.” So he is, and the story resolves with a nice edgy twist that would do Larsson proud. Harry is pleasingly human, with a capacity for hard, grueling work being one of his best features, and the rest of the characters say and do believable things, the murderous snowman notwithstanding. The Norwegian settings are sometimes exotic, sometimes just grimy—who knew that Oslo had a high-crime area?—but always appropriate to the story, which unfolds at just the right pace.