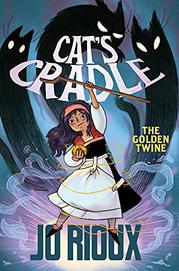 From the Cat's Cradle series, volume 1

A plucky orphan embarks on an adventure crossing paths with imps, monsters, and other creatures.

Suri, an orphan, has stowed away in a traveling merchant camp that moves through the valley of Galatea. Galatea is located just below a mountain chain known as the Dragon’s Belt, which was split open 500 years ago by the Spider Witch, allowing monsters to enter through the gap. Suri’s true desire is to be a heroic monster tamer, but she spends her time doing odd jobs for the camp’s merchants, entertaining the other youth with scary tales of monsters, and evading the camp leader, Leon, who is constantly trying to chase her out of the camp. One night, she unwittingly comes into possession of some magical twine, which holds powers for a band of caitsiths, catlike shape-shifters, who desperately want it back. In their pursuit, they separate Suri from the camp. Full of moxie, Suri has charmed her way into most of the camp merchants' hearts, as is apparent when they have to pack up and leave without her. Though this book was originally published in 2012, Rioux has reillustrated it. Artwork full of energy and comedic timing brings this steampunk-esque, magical world together as it lays groundwork for what will become a trilogy. Journal pages at the end have more info on the kinds of monsters discussed. Suri has tan skin and dark hair; other characters are racially diverse.

A captivating series start that will have readers clamoring for more.