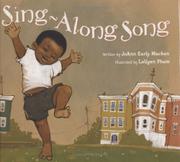 This bubbly tribute to the joys of music is narrated by an African-American boy who lives in an old Victorian house with his parents and baby sister. The likable narrator is only three or four years old, but he is definitely a musically oriented child, finding rhythm and musical influences throughout his day from sun-up to bedtime. He describes the sounds of his neighborhood (a robin, bees, a squirrel, his dog, his cat) as well as the cooing of his little sister and actual songs from his parents, followed by the refrain of “I burst out singin’! I just gotta sing along.” The bouncy, rhyming text invites a creative read-aloud interpretation with lots of sound effects on the animal sounds, which are emphasized with a creative type treatment. Pham’s illustrations bring the cheerful little boy to life, a happy child marching to his own drummer wherever he goes. (Picture book. 3-5)