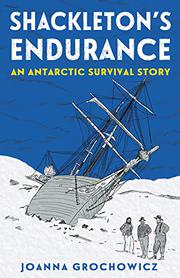 A novelistic account of the Imperial Trans-Antarctic Expedition of 1914-1916, based in part on unpublished archival materials.

Taking place against the backdrop of World War I and following in the wake of Norwegian explorer Roald Amundsen’s record-setting achievements and the death of fellow countryman Robert F. Scott, Ernest Shackleton and his crew set off on the Endurance in hopes of being the first to successfully cross Antarctica. Though for the sake of drama the disastrous expedition’s events need no embellishment, Grochowicz does add considerable immediacy to her account by casting events in the present tense and inventing some colorful dialogue with occasional speculative thoughts or actions to accompany it. Showing a fine sense of discrimination, she leaves the shooting of the sledge dogs (and the expedition’s cat, Mrs Chippy) offstage but presents in exacting detail rousing scenes such as the time one of the all-White expedition’s members fell into the rotting carcass of a whale as well as need-to-know bits like how to gut and skin a penguin and use its blubber as makeshift soap. The spate of short, rapid-fire chapters is prefaced by two maps and a portrait gallery of rugged-looking expeditioners (including Mrs Chippy) by Lippett and closes with a substantial, scholarly source list. Additional spot art enhances the opening of each new chapter. The engaging and dynamic writing will hook even readers who typically do not gravitate toward nonfiction.

An unusually vivid retelling of the epic survival tale.