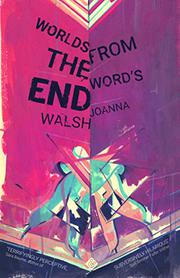 WORLDS FROM THE WORD'S END

There is loss (literal, figurative) at the center of each of Walsh’s surprisingly playful stories, which read less like narratives—though they are—than like parables or prose poems: surreal in their elegance, too slippery and strange to fit into more conventional bounds. In the title story, a woman explains to a former lover why she won’t be writing him anymore: because there are literally no words. “Communication went out of fashion,” she writes, at “about the same time as we stopped speaking,” but then words, she considers, were always inadequate anyway, demanding more words to explain their damage. In “Two Secretaries,” a recent graduate working—very temporarily, she is sure—as a self-styled “clerical assistant” explains the rift between herself and a colleague, an actual secretary. “We may look alike,” she assures us, “but we are not.” In “Hauptbahnof,” a woman takes up indefinite residence in a Berlin train station, waiting for a person who is not waiting for her. Still, she is, like all of Walsh’s women, painstakingly practical in her delusion: the biggest problem with living in limbo in the station, she reflects, is the difficulty of recharging her phone. Also, perhaps, the price of water. “Exes,” which lasts less than a page, is a meditation on a fraught email signoff; in “Femme Maison,” a woman, now single, expands to fit the demands of her house, feeling, for the first time, both ownership of the space and debt to it.

Arresting in their otherworldly simplicity, Walsh’s stories are lonely but never sentimental; grief may haunt her prose, but it is as a fact and not a feeling. A singular reading experience that leaves a mark.