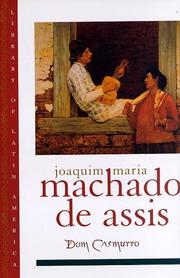 Dom Casmurro ($25.00; Nov.; 288 pp.; 0-19-510308-4): Oxford's newly launched ``Library of Latin America'' wisely begins with attractive new editions of the fiction of Brazil's greatest novelist. Originally published in 1900, this novel is the first- person confession of Bento Santiago, a middle-aged lawyer whose long marriage to the woman of his dreams (the delightfully named, and delightful, Capitu) fails to relieve his myriad frustrations and suspicions. The self-tormenting narrator's explosive, digressive revelations of his own vanity and shortsightedness make for both a piquant criticism of the romantic temperament and an unforgettably wry character study.