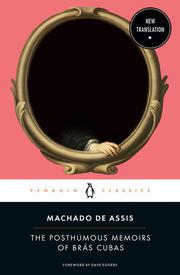 THE POSTHUMOUS MEMOIRS OF BRÁS CUBAS

Machado (1839-1908) never met a literary form he could not master; his poems, plays, stories, newspaper articles, and other writings are all exemplary, and he is regarded as Brazil’s greatest writer more than a century after his death. This novel, published in 1881, at once lampoons and celebrates the liberal ideals of the country’s intelligentsia, and it’s told from an odd viewpoint: that of the corpse of a generally useless minor aristocrat. “I am not exactly an author recently deceased,” Brás Cubas declares at the opening, “but a deceased man recently an author.” In 160 mostly short episodes, all dedicated to the worm that took the first bite of his interred body, Brás Cubas outlines what he’s bothered to understand of the intellectual currents of his time; given the choice between praying for glory in the here and now or glory in the afterlife, for instance, he finds something else to do. One of those things is to go to Portugal and get a law degree without much enthusiasm for the project, instead acting up as “a wastrel, a superficial, troublemaking, and petulant student, given to adventures, following romanticism in practice and liberalism in theory.” Back home, Brás Cubas takes up with a married woman while yearning for a lost love, finding himself in a condition that he calls “the solidarity of human disgruntlement.” Not even Aristotle could foresee the mess he’s in, he concludes. Machado’s pages are punctuated by nicely philosophical apothegms (“What lies between life and death? A short bridge”) and fables, one of which explains the unceasing battle between reason and folly. Such passages read as if from classic texts, while his here-and-now reminiscences of lost loves and other missteps could have been written yesterday. All are highly entertaining.

Machado deserves wider familiarity among English readers, and this is a fine place to start reading him.