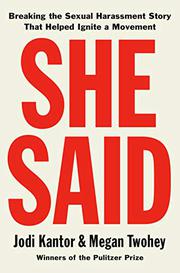 Breaking the Sexual Harassment Story That Helped Ignite a Movement

A behind-the-scenes look at the Harvey Weinstein case as told by the two New York Times journalists who broke the story.

When Kantor (The Obamas, 2012) and Twohey published their 2017 article series implicating Weinstein in a 30-year-long sexual misconduct scandal, it garnered worldwide attention, earned the news outlet the Pulitzer Prize, and briskly vaporized the Hollywood film producer’s career and reputation. In vivid, cinematic fashion, the authors describe the risky investigation from its first probing telephone calls and emails to the challenges of obtaining recorded interviews. Despite episodes of self-doubt, an avalanche of testimonials from victimized women started pouring in. Kantor and Twohey focus on the details of how they doggedly procured sources, chased leads, and obtained enough concrete evidence to blow the case open. As the attestations began to accumulate, so did the trouble, including calculated interference and intimidation from a supposed Weinstein-hired Israeli intelligence organization, which attempted to sabotage the entire endeavor. The authors also examine the nature of wealth and power and how the corruption of privilege infected Weinstein, Miramax, and his expansive web of malefactors, which included employees, publicists, and the corporate machines aligned alongside him who overlooked his reprehensive behavior and supervised his confidential settlements to the women he abused. The authors chronicle the early testimonies from Gwyneth Paltrow and Ashley Judd as well as an initially reluctant Rose McGowan, who accused Weinstein of raping her and labeled his notorious behavior “an open secret in Hollywood/Media.” The journalists’ work helped ignite the burgeoning #MeToo movement and inspired a massive cultural sea change, but they also acknowledge the grueling work ahead, as evidenced in the book’s concluding chapters featuring Christine Blasey Ford, who shares her personal insights on the steamrolled Supreme Court appointment of Brett Kavanaugh. Both admirable and suspenseful, the narrative is a fitting testament to the power of persistence and dedication in exposing critical crimes.

Keenly executed, exemplary spadework dedicated to justice for all women caught in the crosshairs of privileged power.