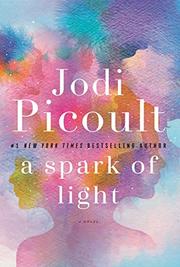 A SPARK OF LIGHT

A day at a Mississippi abortion clinic unfurls backward as a self-appointed avenging angel wreaks havoc.

Picoult’s latest takes the unusual tack of proceeding in reverse. At 5 p.m., the Center, Mississippi’s last remaining abortion clinic, is awash in blood as Hugh McElroy, a Jackson police negotiator, is still bargaining with George Goddard, the deranged gunman who has occupied the Center for hours. Five hostages have been released, two gravely wounded: Hugh’s sister, Bex, and Dr. Louie Ward, the Center’s surgeon (whom, according to her author’s note, Picoult based on the outspoken abortion provider Dr. Willie Parker). One person inside is dead, and Hugh is still waiting for word of his teenage daughter, Wren, who had gone to the Center for a prescription for birth control pills, accompanied by her aunt Bex. As the day moves backward, several voices represent a socio-economic cross-section of the South; a few are on the front lines of the anti-abortion vs. abortion-rights war—but most are merely seeking basic women’s health care. Olive, 68, is at the Center for a second opinion; Janine, an anti-abortion activist, is there to spy; Joy is seeking an abortion; and Izzy is pregnant and conflicted. George wants revenge—his daughter recently had an abortion. A third father-daughter story runs parallel to the hostage crisis: A teenager named Beth, hospitalized for severe bleeding, is being prosecuted for murder after having taken abortifacient drugs she'd ordered online at 16 weeks pregnant. At times, Picoult defaults to her habitual sentimentality, particularly in describing the ties that bind Hugh, Wren, and Bex. This novel is unflinching, however, in forcing readers to witness the gory consequences of a mass shooting, not to mention the graphic details of abortions at various stages of gestation and the draconian burdens states like Mississippi have placed on a supposed constitutional right. For Dr. Ward, an African-American, “the politics of abortion” have “so much in common with the politics of racism.” The Times Arrow– or Benjamin Button–like backward structure adds little except for those ironic tinges hindsight always provides.

Novels such as this extensively researched and passionate polemic are not necessarily art, but, like Sinclair Lewis’ The Jungle, they are necessary.