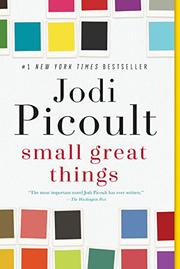 In Picoult’s (Leaving Time, 2014, etc.) latest novel, Ruth Jefferson, a labor and delivery nurse, struggles to survive claims of murdering a patient while keeping her own family intact.

Picoult has made a name for herself crafting novels of depth and insight, peopled with rich characters and relationships. Here, she explores the intersection of racial bias, medicine, and the law. African-American Ruth Jefferson has been a labor and delivery nurse for more than 20 years, and she's the kind of professional every patient dreams of: she genuinely cares for her patients and takes joy in seeking out ways she can help them—whether it be a back rub or an epidural. But Ruth is completely thrown when a newborn baby’s parents, both white supremacists, demand that she be removed from their care team because they don't want a black person touching their child. In a moment of deliberate plot maneuvering, Ruth is left as the sole nurse on the child’s floor, and the baby goes into cardiac arrest and dies. Ruth, accused of hesitating before performing CPR, is charged with murder. There's no question that Picoult is a talented writer. The plot is suspenseful, the structure and pacing exquisite. But there is also no question that writing a story from the perspective of a black woman requires more racial consciousness than she displays here. At times the plot feels more like an intellectual exercise to understand racism than an organic exploration of a real person's life. The voice is that of a nonblack person discovering all at once that racism exists rather than that of a black person who has lived with racism her whole life. Picoult has drawn upon every black stereotype available: here is the black single mother, the angry black woman, the mammy, the maid, the teenage "thug," the exceptional token, and the grandstanding preacher. Alternating among the points of view of Ruth; the white supremacist father, Turk Bauer; and Ruth’s lawyer, Kennedy McQuarrie, Picoult is at her best when she lets the novel solidify into Kennedy’s narrative, the tale of a white woman who thinks she's more liberal than she actually is. It's Kennedy's journey of coming to terms with her own racist relatives and white privilege, as she realizes, for the first time, the pervasiveness of American racism, that is the real story here—and the novel would have been stronger if it had been written from this perspective throughout.

After she sets up a world in which racism thoroughly defines every aspect of character and plot, Picoult's conclusion occurs in a separate fairy-tale world where racism suddenly does not exist, resulting in a rather juvenile portrayal of racial politics in America.