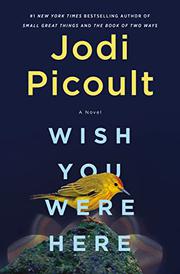 WISH YOU WERE HERE

A young woman finds herself at a Covid-induced crossroads in Picoult’s latest ultratopical novel.

Sotheby’s associate Diana O'Toole, age 29, and her surgical resident boyfriend, Finn, are planning a trip to the Galapagos in March 2020. But as New York City shuts down, Finn is called to do battle against Covid-19 in his hospital’s ICU and ER, while Diana, at his urging, travels to the archipelago alone. She arrives on Isabela Island just as quarantine descends and elects to stay, though her luggage was lost, her hotel is shuttered, and her Spanish is “limited.” What follows is the meticulously researched depiction Picoult readers have come to expect, of the flora and fauna of this island and both its paradisiacal and dangerous aspects. Beautiful lagoons hide riptides, spectacular volcanic vistas conceal deep pits—and penguins bite! A hotel employee known only as Abuela gives Diana shelter at her home. Luckily, Abuela’s grandson Gabriel, a former tour guide, speaks flawless English, as does his troubled daughter, Beatriz, 14, who was attending school off-island when the pandemic forced her back home. Beatriz and Diana bond over their distant and withholding mothers: Diana’s is a world-famous photographer now consigned to a memory care facility with early-onset Alzheimer’s, while Beatriz’s ran off with a somewhat less famous photographer. Despite patchy cellphone signals and Wi-Fi, emails from Finn break through, describing, also in Picoult’s spare-no-detail starkness, the horrors of his long shifts as the virus wreaks its variegated havoc and the cases and death toll mount. Diana is venturing into romantically and literally treacherous waters when Picoult yanks this novel off life-support by resorting to a flagrantly hackneyed plot device. Somehow, though, it works, thanks again to that penchant for grounding every fictional scenario in thoroughly documented fact. Throughout, we are treated to pithy if rather self-evident thematic underscoring, e.g. “You can’t plan your life….Because then you have a plan. Not a life.”

Warning: Between lurid scenes of plague and paradise, whiplash may ensue.