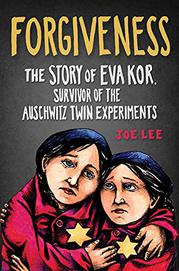 The Story of Eva Kor, Survivor of the Auschwitz Twin Experiments

A biography, in comic form, of a survivor of Josef Mengele’s horrific experiments on twins.

Eva and Miriam Mozes are twins, born in 1934 to the only Jewish family in their Romanian village. Though Papa, fearing the antisemitism of interwar Romania, wants the family to flee to safety in Palestine, Mama argues against it. And so it is that they are still in Romania when their home is invaded by Hitler’s ally, Hungary. Following an all-too-familiar story, the Mozes family is sent first to the ghetto and then on to Auschwitz-Birkenau. Torn away from their family, the girls are brought to Mengele for his nightmarish twin experiments. The graphic form mercifully makes it difficult to provide much detail of the stomach-churning tortures Mengele inflicted on those he found lesser, though the blocky illustrations certainly feature starvation, death, and disease. After the girls are liberated by the Soviets, they begin the second part of their ordeal: living with their trauma. Two extremely dense chapters detail the next 74 years, eventually building to the journey Eva would take late in her life toward liberating herself by forgiving the Nazis. This overstuffed survivor tale owes less to Maus than it does to the For Beginners series of graphic nonfiction. Dense blocks of historical play-by-play, ungainly prose, and hard-to-read lettering make this a slog.

An important story drowned in illegibility and exposition.