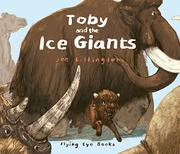 TOBY AND THE ICE GIANTS

A small bison meets some ice age megafauna in this prehistoric ramble.

Assuring his mom that “I’m big now. I’m not scared!” little Toby scampers off. He collides with a grumpy woolly rhinoceros, introduces himself to a Megatherium, wonders at a woolly mammoth’s tusks, and sidles anxiously past a handful of other Pleistocene creatures—including a group of fur-clad humans—before gamboling back to safety. Along with exchanged greetings, each encounter comes with a side box of descriptive facts and comments, plus a small image of the animal posed next to a human (in modern dress) for comparison. Young viewers will marvel at the succession of massive ruminants and predators, which Lillington renders in watercolors with reasonable accuracy, if anthropomorphic facial expressions. He offers measurements in metric units only (except for humans, whose weight is opaquely designated “average”). Rather anticlimactically, he caps his gallery with a perfunctory, unillustrated list of “some other amazing ice age animals that Toby didn’t get to meet!”